Moogfest is a diverse celebration of live music, engaging discussions and workshops in the heart of the Research Triangle in Durham, North Carolina. This four-day music and technology festival celebrates the legacy the inventor of the Moog synthesizer, Robert Moog.

DOPE HAUS editor Chanel Klein traveled from rainy Canadian west coast to the Southern summer heat of North Carolina to see what Moogfest had in store. A surprise appearance by comedian Hannibal Buress warmed up a stiff audience before Talib Kweli’s performance on the first night of the festival. Hannibal participated in synth building workshops and interviewed headliners Animal Collective and Flying Lotus for his podcast, asking his questions through an auto-tuner. “We had fun in front of a live crowd,” says Hannibal, “it was crazy.”

DOPE HAUS caught up with Hannibal about how much he enjoyed playing with all the gear at Moogfest’s Modular Marketplace. “People had different synthesizers and instruments and video things that they were showing off,” says Hannibal, “I was really into it. I’m glad I wasn’t too buzzed while I was in there because I would’ve bought fuckin’ everything.” “Being in that space messing with different instruments and tools gave me a lot of ideas for my next tour,” says Hannibal. The New York comedian closed out the final night of Moogfest with an impromptu comedy set to a sold out audience in Motorco Hall. Check out the exclusive DOPE HAUS interview to see what else Hannibal got up to over the weekend. Rapper Tasha the Amazon slayed her performance at Motorco Hall straight off a flight from Toronto. Her bars was fierce and cutthroat, giving the South a taste of how T-dot gets down. Princess Nokia performed an energetic set of classics and new tracks. Princess Nokia closed her set with her two god daughters in a heartwarming performance of Young Girls. Kill Alters jammed out to a different, more visceral sound on the Motorco Hall stage. The Armory, a huge warehouse space, was home to banging techno and house sets by Octo Octa, K-Hand and Simian Mobile Disco. The dive bar venue called the Pinhook was a more intimate space for acts like Russell E.L. Butler, Jubilee and Lena Willikens. I wish Bearcat from Discwoman would’ve played a second set at one of these indoor, more intimate venues. Her booty shaking beats would’ve felt right at home at the Pinhook or Armory. 3) WORKSHOPS FOR THE MOOG NOOBS

Before Moogfest I barely knew anything about synth music or technology. I was very intimidated by all the high-tech gear when I first entered the Modular Marketplace. It was packed with tons of machines with a trillion knobs, lights and switches that produce the beepbopboops I loved so much. I didn’t know where to start. In the back of the marketplace were singular workstations with synthesizers and simple step-by-step instructions on how to make the machines sing. Without these instructions and the opportunity to learn at my own pace without judgement or pressure, I never would’ve tried experimenting with this awesome technology. Behind the workstations there was a video installation that could be controlled by various instruments, including a theremin. Words can’t accurately describe it, watch it in action below.

4) NOT YOUR USUAL FESTIVAL CROWD

This isn’t your regular festival. Moogfest feels more like a conference where you learn in the daytime and get weird at night. The crowd is friendly yet very reserved. You won’t find anybody rolling their face off or swimming their way out of a k-hole beside a speaker on the dance floor. This is the perfect festival for quiet people who love loud music and hate camping. It’s also an early crowd because most places in Durham close at 2am. On the first night of Moogfest, Talib Kweli tried his hardest to get the audience to rap along to hip hop classics but it didn’t do much to sway the stiff crowd. Hannibal Buress even stepped up to warm the crowd before the show began. I guess this is what happens when you get a bunch of introverted synth lovers away from their headphones to a large, brightly lit outdoor mainstage to see a hip hop legend. The Moogfest crowd was very well behaved and respectful, no fist fights or altercations were had. Traveling alone as a woman is always scary, especially in nightlife industry, but I never once felt unsafe here. The stages and venues were a lot less crowded than I expected. The bathrooms were always available and the cleanest festival facilities I’ve ever seen. Speaking of bathrooms…

To protest recent anti-LGBTQ legislation in North Carolina, Moogfest provided gender neutral bathrooms at their music venues. Oakland techno producer Russell E.L. Butler spoke to DOPE HAUS about inclusivity in festival culture. “Moogfest has done a good job of demonstrating how simple and non-invasive it is to acknowledge a person’s identity,” says Russell, “it’s as simple as changing the sign on a bathroom.”

Moogfest’s diverse lineup featured artists from a wide variety of cultures and gender identities, providing a breath of fresh air from the usual boy’s club of major festival lineups. Durham producer DJ Playplay lead a workshop called ‘DJ 101 for Women and Gender Non-Conformers’ on the first night of the festival. “I wanted a space where women and gender non-conforming people can come and not have the conversation be dominated by cis-men and be able to experiment without the pressure of feeling watched,” says Playplay. Overall, Moogfest is an experience to behold with amazing acts, workshops and technology. Huge shoutout to MagnumPR, the press team who made my experience at Moogfest a breeze. Big thanks to Erika, David and Siouxz!

Check out our Moogfest interviews:

All photos and videos by Chanel Klein 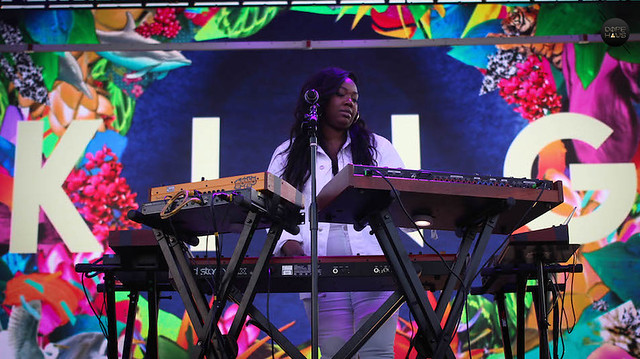