WATCH THE VIDEO RECAP AND INTERVIEWS BELOW

Digital Motion hosted their five year anniversary at the weekly bass gathering at Red Room’s ‘SUBculture Saturdays’. Vancouver locals opened up the evening as Willisist of SHAHdjs and Bullet Bill — a familiar name at Red Room — got bodies moving in preparation for the UK massive. Bullet Bill dove into a high energy set, dipping into his archive of LPs to sample in an old school flavour. He brought a warmth of dub roots and reggae beats that he mixed in with his signature liquid drum and bass style. 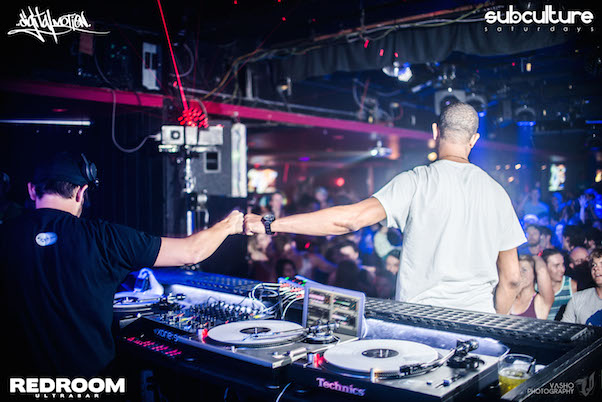 At long last, Andy C’s three vinyl decks were ready, and MC Armanni Reign was calling out to the Rudeboys and Rudegirls, the crowds anticipation at its’ climax. The room transformed instantly into a full-on rinse out from this UK legend — the co-founder of Ram Records and pioneer of this fast and hard genre. Andy C’s bursts were timed to a tee, with just enough pause between drops to allow a chance to catch a breath.

“It was amazing, I think we went fourty minutes over our allotted time. The vibe was just real in here,” Andy C.

Armanni kept the crowd engaged and hyped, while he rattled off raps with such speed and articulation that my brain could not even attempt to understand the lyrics, but simply listen to his vocal cadence. Andy C moved through his two hour set, experimenting through the genres as he worked his way into a taste of reggae, hard dub and into a hardstyle house bounce.

An artist’s ability to remix reveals much of their skill and innovation as they create something new. I was highly surprised when I heard Andy C’s rendition of Jack ü’s ‘Take ü There’, a track that I’ve heard redone a dozen times but never had I heard it executed to the level that poured out of the sound system. The pairing of delicate female vocals and machine gun bass patterns worked in total harmony and opposition of each other.

“There was DnB hits in here from 20 years ago, 15 years, 5 years and more up to date. We went across the whole spectrum,” Andy C.

His set closed out to a relentless finale, dropping bangers back to back until the cops showed up outside and forced a close to the night. Each person I spoke with after the show made the same comment, that they had never seen the venue so full. The best brings out the best and Vancouver’s underground music scene understands when an A-list name rolls through. A buddy messaged me a few days later to ask how it was. I replied with all that needed to be said, “I have no words, just sore legs.”