I had no idea what to expect heading down to LA from Vancouver to experience my first music festival riding solo. I was headed for the Dirtybird Campout, a music festival put on by Dirtybird record label at Oak Canyon Park in Silverado. On the shuttle bus from LAX, I met fans from all around the globe repping Dirtybird merch and funky costumes.  Nervous and excited, we all agreed, “I don’t know what this weekend’s going to be like… but I know it’s going to be good!” 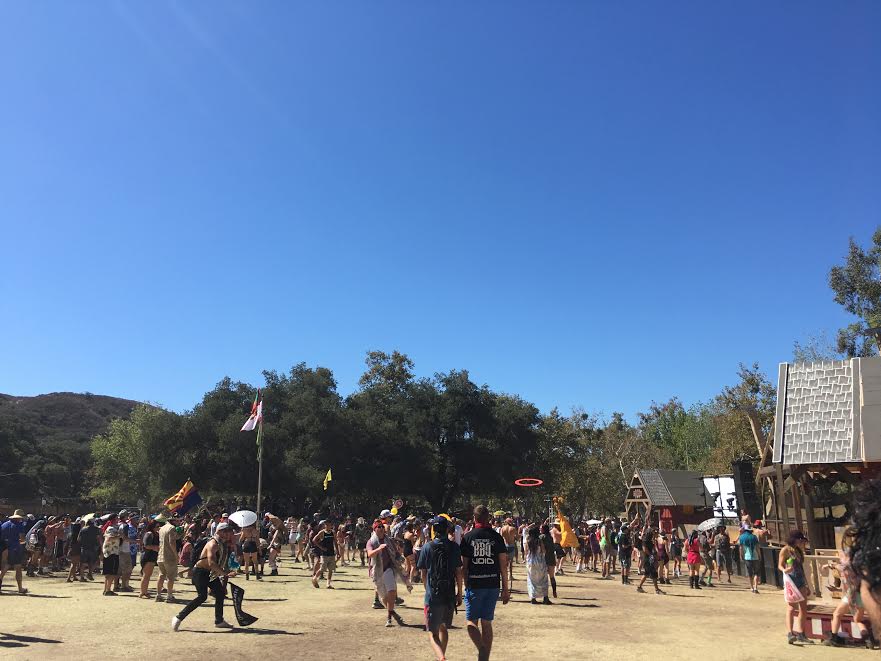 Over the next 3 days, the people, the experiences and the energy I encountered completely topped every festival I’ve ever been to. Nobody does it like Dirtybird.

Every corner had something for everyone, filled with opportunity to meet people from all walks of life. I’m very glad I chose campout as my first festival to do on my own, because making friends was almost too easy. There was basketball, kickball, billiards, a puppet show, capture the flag, mini golf, a water balloon toss, tug of war, a costume boat relay race, lap dance musical chairs, tie dying, wood carving, and the legendary disco bingo. It felt just like Disneyland with so much to do you can’t possible do it all in one trip.

Easily, the highlight was the late night karaoke. Fans took the stage solo, in pairs, and in sloppy intoxicated groups, putting on quite possibly the best show I’ve seen in my whole life. I witnessed everything from Spongebob Square Pants slay Beauty & The Beast’s “Be Our Guest”, to a very determined girl in a onesie attempting to sing The Little Mermaid’s “Part Of Your World” although she had absolutely no voice left at all. Even I braved the stage to sing “Where is the Love”.

One thing you’ll notice at Dirtybird Campout is that everyone’s a bit of a freak! Creative costumes and totem poles are common sights at music festivals, but the Dirtybird crowd goes the extra little mile. Since the label itself prides itself on being wonderfully weird with song lyrics like “In tha butt”, “Barrump” and “We can make a cake”, Dirtybird makes it okay for the rest of us to go all out, and I mean ALL-OUT.

One of my favourite characters had to be a man wearing a flamingo hat and using a 10-foot plastic bong as a totem for the whole three nights. I ran around with a boob hat on my head for the first two nights before I switched into a penguin onesie and gas mask for the rest of the trip. Needless to say, I made plenty of friends who were just as weird. 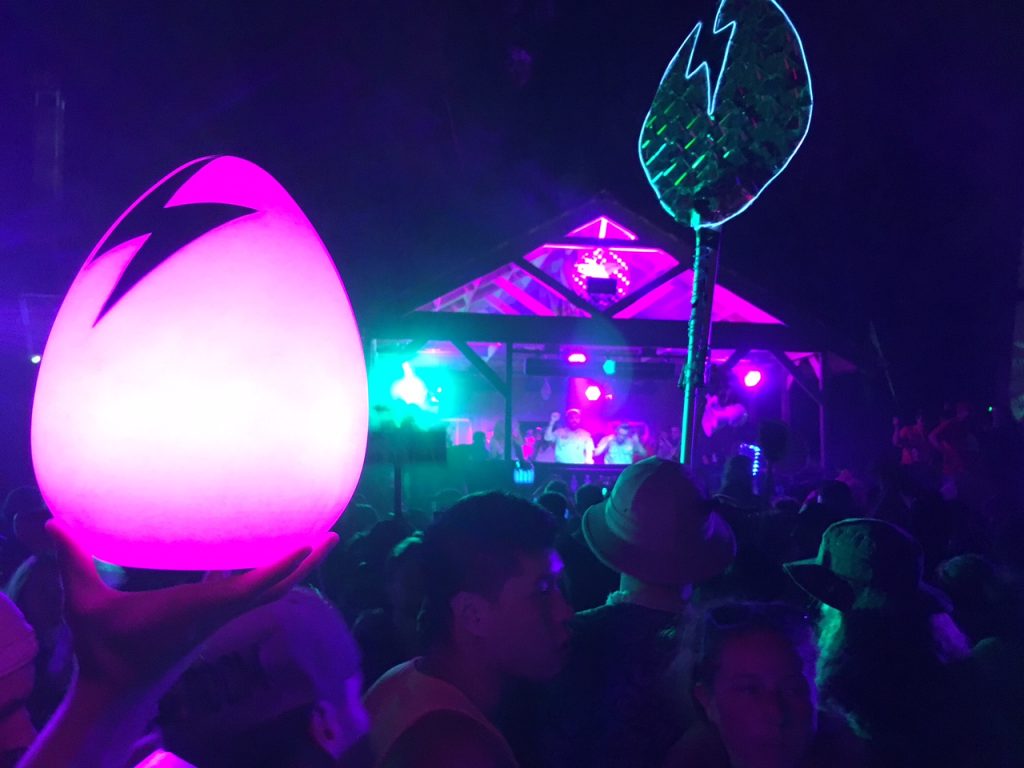 3) The Artists Connect with Their Fans

It was refreshing to see how involved the artists were with their fans. Not only were they approachable but very hands-on in the activities and events themselves. They sang karaoke, they played tug of war, they even threw down a set in general camping. I got to tackle Claude Vonstroke with a massive hug showing him my boob hat and owl costume that screamed “Dirty + Bird”. I didn’t hold back praising Ardalan for his flawless set when I found him by the food stands. I watched Justin Martin spin the wheel of pizza and give away prizes like free showers to a whole lineup of fans waiting to meet him. I lost my breath laughing at late night karaoke with Will Clarke. Every single artist I had the pleasure of meeting was so down to earth, friendly and willing to take the time to talk to you, which made the experience all the more memorable and two-way.

What stood out to me about a record label throwing a music festival was how synchronized the music was on and off the stage. As soon as I got on the shuttle, a guy hopped on with a boom box busting out all the Dirtybird hits, and the party had already began. No one wanted him to turn it down, no one wanted him to turn it off and certainly no one wanted him to change genres. That’s how it was all weekend. Wherever you were, you were constantly taking in minimal, repetitive, thick and chunky bass with synths and sounds that were undeniably Dirtybird. Picking up some merch? Bumpin tunes! Picking up a bandaid at the medical booth? Bumpin tunes! Escaping the heat in an RV? Bumpin tunes! Wandering lost through someone else’s campsite in the middle of the night? More bumpin tunes! Whenever you went, it felt like everyone was on the same wavelength, and there for the same reason.

Though there was so much to explore, it was hard to take a break from the dancefloor with such an insane lineup of talent. Though under the record’s umbrella, no two sets sounded the same, and no tracks were overplayed. Shiba San threw down a bassy, housey and vocally set I completely lost my voice to as the crowd chanted “Shiba!”. Bruno Furlan went hard from the start, with bassy bird-like synths completely twisting our minds. Looking like a wizard on the decks, Will Clarke defied daytime and took us straight into his deeper, techier sounds, getting our booties percolating aggressively like it was 4 AM turn up time. Reggie Watts played an amusing set almost entirely with his voice. The music was truly 10/10, on stage and off, day and night, and the role it played in setting the vibe was immense. Everybody came together based on the shared love for the Dirtybird sound. 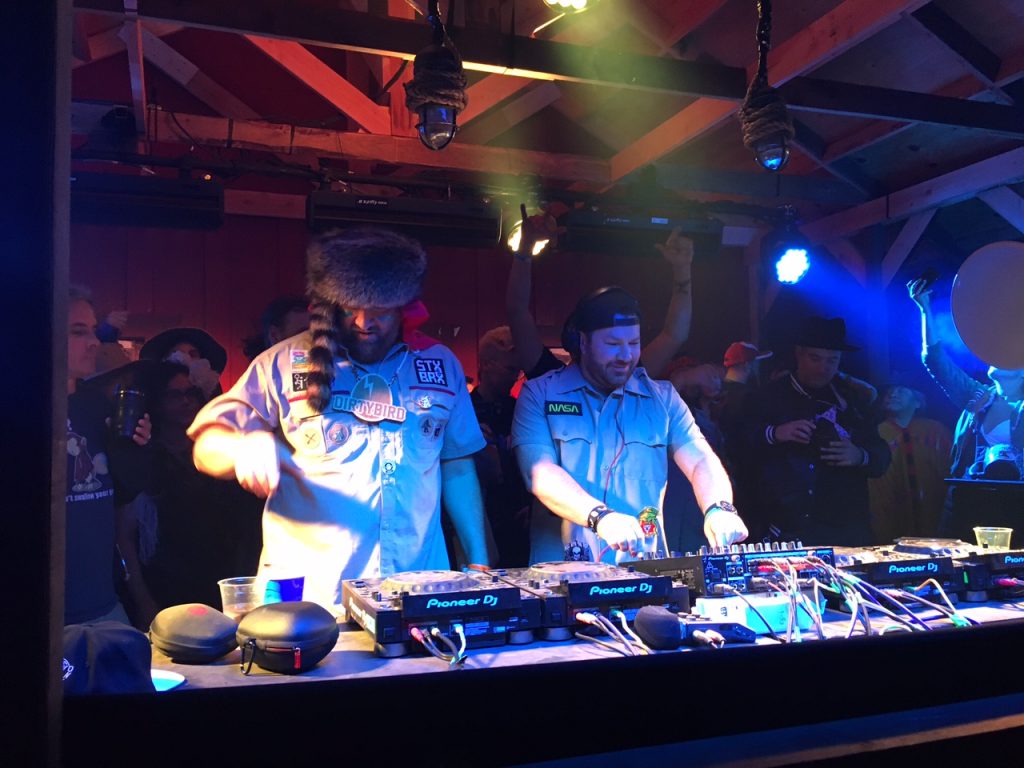 Claude VonStroke and Shiba San set it off

5) The Impact Lasts A Lifetime

On the first night, we watched the Dirtybird documentary that was truly eye-opening. We watched footage from back when Justin & Christian Martin impulse-bought a sound system and had an idea of throwing a party in the park. Later, a photo slideshow gave us glimpses into the label throughout the years. As we enjoyed the music from the stage, we caught baby-faced Justin Martin, Claude Vonstroke spinning vinyl, met the people behind the scenes who brought the festival to life, and saw a timeline of J Phlip’s hairstyles throughout the years. The photos were funny, relatable, and not all were flattering, which made it real and lead us to a much deeper connection. To think that today, a community of over 7000+ people came together to experience what the record label had to showcase is to be commended.

In the closing family set, each performing artist got to play one track. Some chose the tracks that got them signed, and some highlighted other artist’s songs. When Green Velvet went back to back with Claude Vonstroke, I observed intently as they adapted their typical styles to beautifully complement the other, few words exchanged, purely communicating through music. Moments like these are a huge reminder of music as a universal language, and truly have a lasting impression to the many DJs & producers in the crowd just like me. The amount of practice that goes into mastering those performance skills is never-ending. The process of creating truly original music to share with others is an even tougher commitment. It was beautiful to see the people who have worked so hard enjoy the payoff. The impact can be felt by just about anyone else too, with Campout acting as a home that inspires creativity, beginnings, a place to be weird, a place to take a break, and a place to just be you.

When I arrived at Campout, I had no idea what to expect, I just knew I’d be in good hands with the Dirtybird crew. Today, I walk away with new friends, new idols, a new family, and a new dream of making that same stage my next destination.

Thank you so much for the incredible experience, Dirtybird. Nobody does it like you do.

Review and photos by Sylva Sivz