Starting as a DJ at the age of 17 years old, Jersey City native YRS Jerzy is next in line as one of the industry’s next big DJ, manager, and music mogul. YRS Jerzy was highly influenced by Funk Master Flex, DJ Whoo Kid and DJ Drama. Aside from being a young DJ on the rise, Jerzy also manages up and coming artist Chox-Mak & NephLon Don as well.

DOPE HAUS asks: How has your hometown influenced your music?

YRS JERZY says: I’m from Jersey City, NJ. The music scene out there is making a lot of changes and I feel that soon we will have a strong music scene. I know one day i will be able to help the scene grow. There are a lot of artists that are on the come up. I feel like I am influenced by a lot of people in the game, I can’t really say I have just been influenced by my city. I move around a lot and meet a lot of different people its just the way it is.

DOPE HAUS: Where do you see yourself in the next five years?

YRS JERZY: I see my self owning and partnering up with different companies and things of that nature. I know one day I will be at that next level and I just have to stay focused and keep pushing. I know that I will be successful and always thinking of the next move to elevate what i already have going on.

DOPE HAUS: What’s your biggest pet peeve about your scene? What changes do you wish to see?

YRS JERZY: One of my biggest pet peeves is artists that think they are too good to learn about the industry. We are in a time where a lot has changed and you need to be a well established brand to really make it. Thats why I keep pushing and not worrying about what other people are doing. I want artists to start seeing more improvement and more artists stepping up and building their buzzes up. I feel like a lot can happen soon, there just had to be a lot more artists that needed to be heard for it to stand out.

DOPE HAUS: Tell us about your best show/gig. Now tell us your worst experience.

YRS JERZY: Best show had a good hundred/thousand people show up and it was great. One of the worst experiences was having a show a long time ago where people didn’t show up like that. Now people are in tuned to the movement, a lot of people are coming out to see what we are about all across the country. It’s just great to meet people that enjoy your work knowing how hard you worked to build this.

DOPE HAUS: If you could go back in time to when you were first starting out, what would you tell yourself?

YRS JERZY: I would tell myself to keep focused and stay on the right path. There is a lot to be done to get to the level you’re going to. Basically I would keep focus like I am now and I know great things are soon to happen. 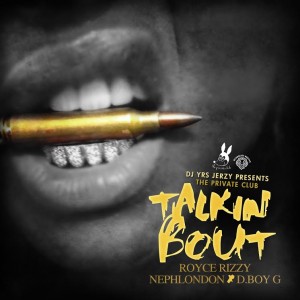