Jaclyn Adair and Sam Steele set out on an adventure to capture the magic of the 2016 Electric Love Music Festival in Cheam Fishing Village, Agassiz in BC, Canada. Part 1 of the review summarizes the festival setup on Thursday and moves onto the first day of the festival on Friday. Stay tuned for Part 2!

Electric Love Music Festival was an hour drive from Vancouver where my boyfriend and his two colleagues of Cat’s Eye Visuals had tightly packed all of the lighting equipment, cables and disconnected chunks of The Arcade stage in the back of the truck. Arriving with the set-up crew a full 24 hours before the ticket holders gave me the hopeful sense that I might just be the perfect candidate to thoroughly review the event in it’s entirety. 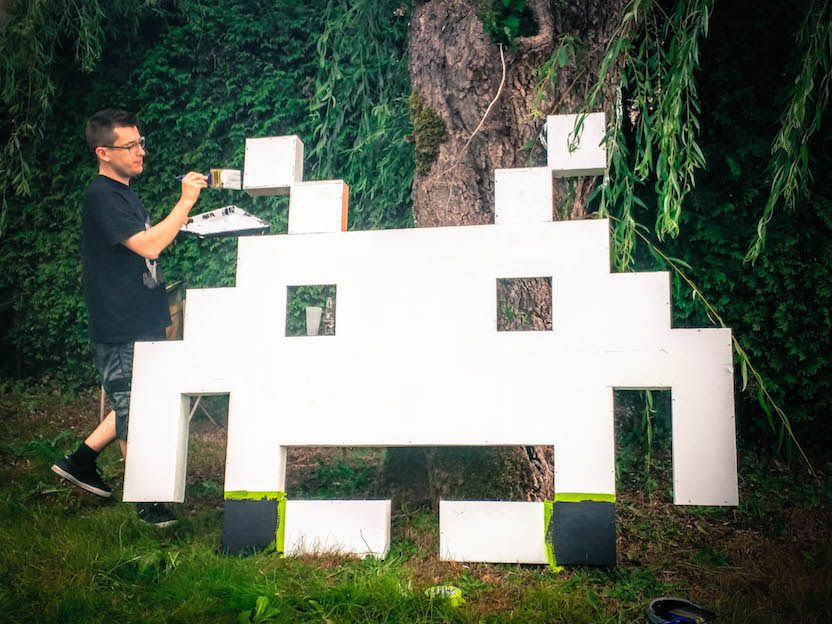 As we pulled in, our Uhaul jerked over some gravelly humps and I had to squint as I hopped out to absorb the sights of the glorious bank of the Fraser River and the stunning mountainous views spanning across the water. Bareboned skeletons of the stage lay along the ground in pieces as sweaty, shirtless and sun-kissed crew members hollered and hoisted in an attempt to bring the stage to life. 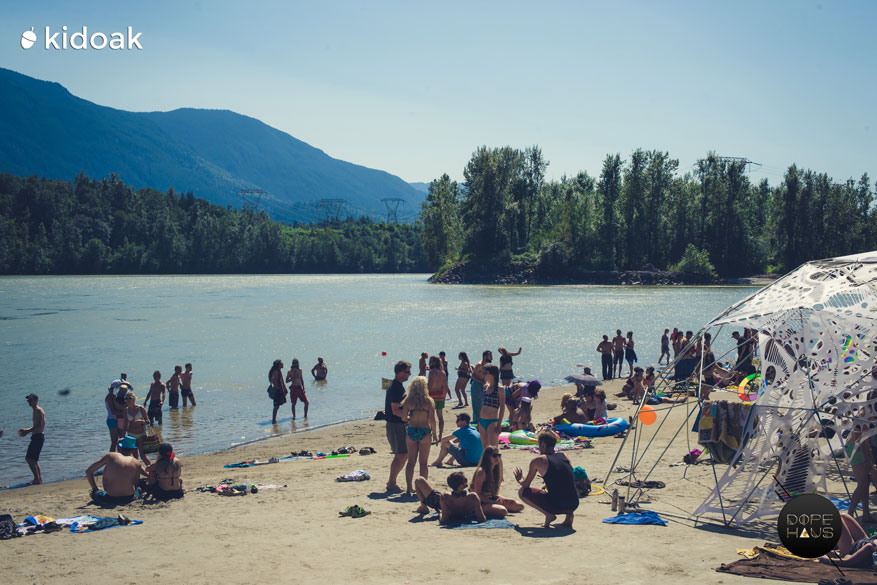 Having made myself obvious as a pen-wielding member of the press by sporting my brand new black and gold “Dope Haus” snapback, I was immediately approached by Danielle Wilson. Danielle is a main member of Electric Love’s production, social media and performs as one half of the duo Average Gypsy.

Dani explains that this year is their second event at the same location in Cheam Fishing Village, expanding from their first year as a single night event in 2015 to a full three day festival. Dani later opens up to me about the struggles the organizers faced in an attempt to relocate from Kamloops but how she ultimately was satisfied remaining on their beautiful home turf. After wandering the spacious terrain I quickly set up camp in a shady spot before busting it back to the giant white dome that The Arcade was to be built under.

As dusk fell, the place was filled with flashes of headlamps and the racket of saws, drills, yelling and an earth shattering, roaring sound check from the sizable PK sound system that was eventually installed along the front.

Once assembled, The Arcade was a backdrop of a whopping 24 foot wide grouping of hexagons faced with an eight foot long “space invader” as a DJ booth.  I spent the entirety of Thursday night and a good portion of Friday morning assisting in assembly and painting before finally face planting into bed at around 4:00am. 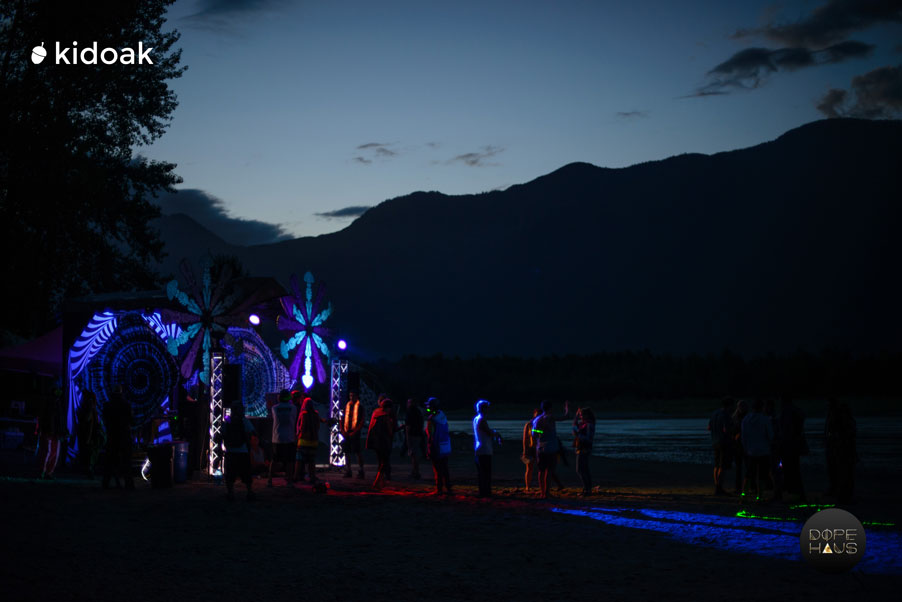 Sleep? At a festival?

I wake up on Friday after less than five hours of rest with a pressing sense of exhausted urgency to hurry my clammy body out of my hellishly humid tent.  After breakfast, I spent the remainder of my day meandering through the grounds trying to find the best cell service to connect with a few artists and confirm time slots to interview them in the midst of their busy festival schedules. Dave Rollie of SkiiTour sends me a quick message asking if I can combine their interview with Evan Chandler of Slynk, scheduled for that evening. I agree and spend the next hour rearranging questions from their separate interviews and splice them together. 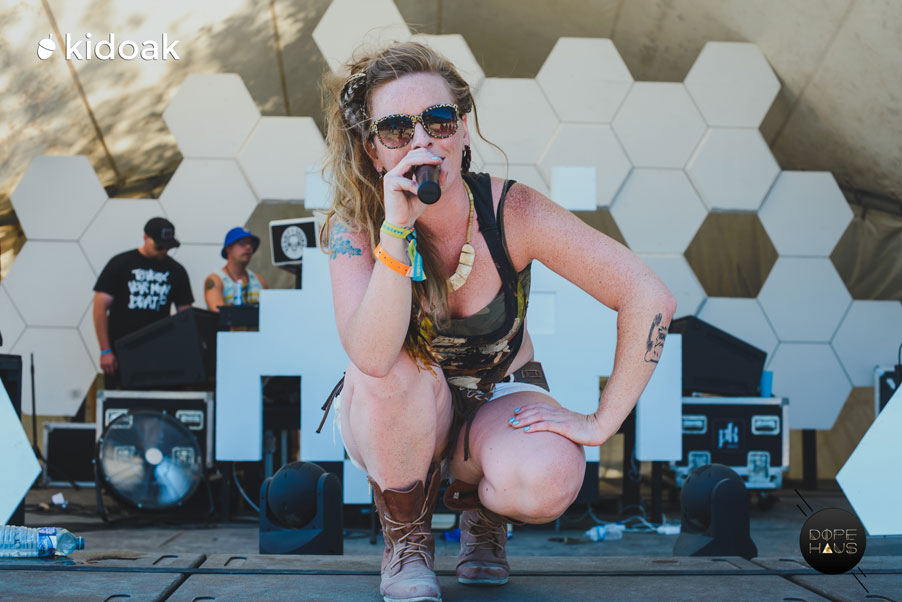 Friday evening kicks off, the heat begins to dip and the bass starts to crank. I spent hour checking out a killer combo of heavy hitting drum and bass/dubstep from Deadly Soundz alongside Lozen, a booty-quaking and fearless female who raps and hypes up the eager party folk at The Arcade. She’s got a voice that is distinct and rugged, spitting provocative and merciless lyrics as she twerks around the stage and even hops down to hustle some attention from the dancers on the floor. 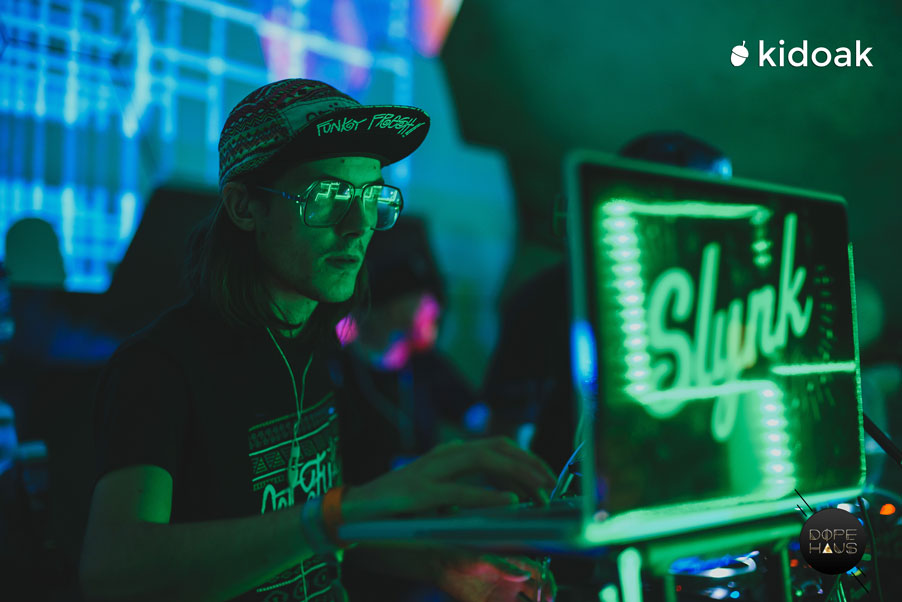 Shortly after, I met up with SkiiTour and Slynk for their interview. The bass music from the stages was just beginning and we set off in search for a quiet spot away from the doontzdoontzdoontz to record a clean interview. We settled on a beautiful lush bank beside the river. Dave of SkiiTour laid back to discover that we were situated beneath a black buzzing mass of mosquitoes swarming ominously above us like a blood sucking mushroom cloud and was batting them off during our entire interview (READ HERE).

After being eaten alive by bugs, I manage to rush over to catch the first set I would be seeing at the now completed neighbouring Nest stage. The Nest is a tall peaked tent with a centered focus on the colourful heart-shaped ‘Electric Love’ logo. Encompassing the heart is a huge pair of projection-mapped wings and a protruding head tops the bird that gazed out into the DJ booth and dancefloor. The gorgeous Mya Hardman (AppleCat) of Erotica Electronica played some seriously sexy, dark wobbles that managed to get my knees dropping and fingers snapping with a perfect sunset vibe.

A quick stock up back at camp lead me to my cameraman and partner in crime for Dope Haus, Sam Steele of Kidoak Photography. We exchanged an enthusiastic hug and I made sure to introduce him to my French Canadian jean jacket wearing dinosaur totem Jean Jacquesasaurus. With a sizable smirk and camera glued to his face, Sam grabbed some ridiculous backstage footage and photos of funky breaks party that endlessly blasted through the trees.

The crowd was showered in a layer of SkiiTour’s “snow” (and told to make sure not to eat it – it’s toxic), blessed with Slynk’s newly acquired skills on his talkbox and then bouncy Father Funk came on to stretch the PK sound system to it’s full bass potential. After interviewing Father Funk (READ HERE) it was bedtime, but with the party still rocking I plugged in some foamy earplugs and proceeded to pass the hell out.

It’s just not a festival without toxic snow in July.

Click here for Part 2 of the Electric Love Review!