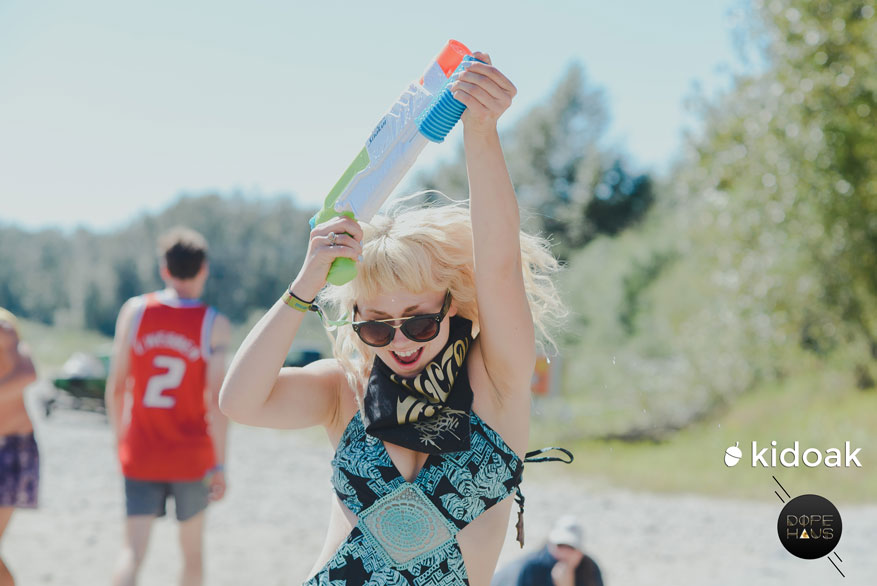 Saturday is in full swing by noon as I take my first stroll of the day past the stages by the riverside. The scents drifting from the food trucks have managed to attract a lengthy lineup of famished flailers. Sparkling fluorescent rave merchandise encircles the domes along the river and some sleepless randoms are continuously interrupting me to blather some garbled mumbo-jumbo at my face. 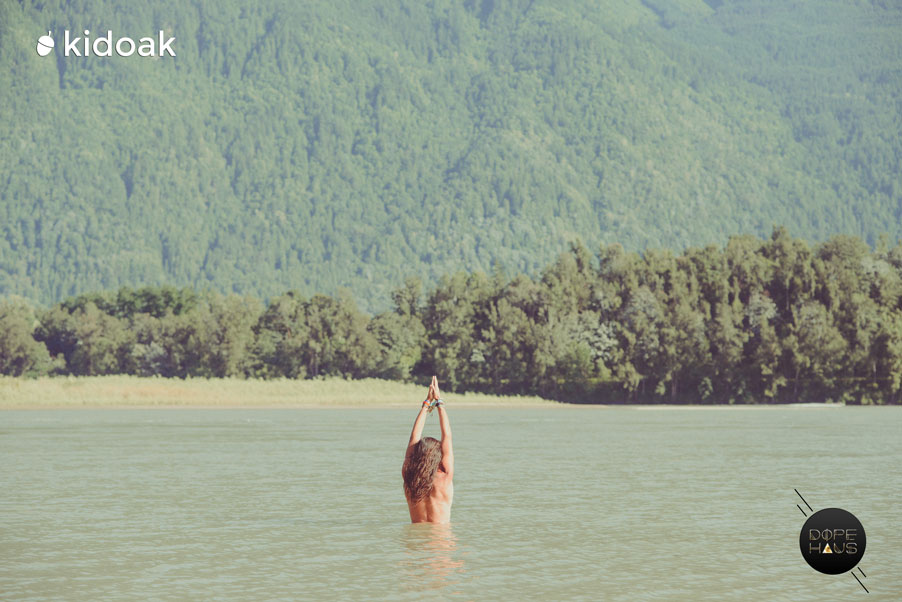 During a cleansing dip in a beautiful lagoon-like pond I think about how significant it is to be a part of an event like Electric Love within this germination phase. In its true baby chapter, this weekend was feeling organic, nurtured and alive. Potentially in it’s golden age, I can confidently pass along the message of “You absolutely gotta check out this festival,” without being met with a veteran-style response that it ain’t like what it used to be. 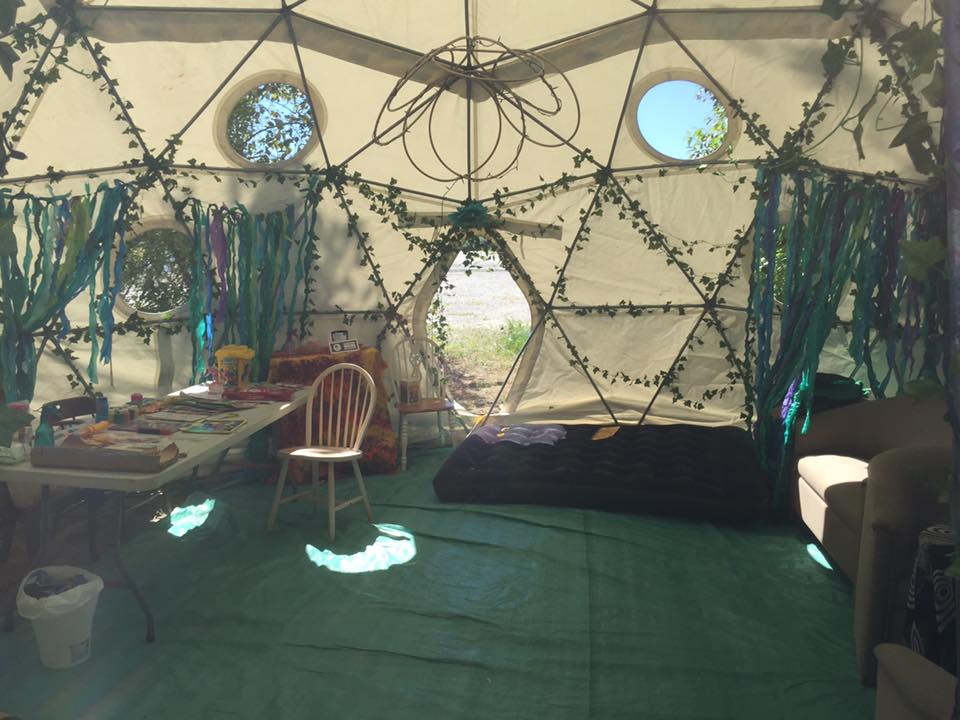 During a strut back through the shifting basslines of the waterfront venues I wave to Munroe Ro in the Karmik sanctuary tent which was beautifully decorated by Randy Dube. Their purpose here is essential to the integrity of the event, giving the community an open minded sense of protection and companionship when the bright lights and intense music become too much as well as important suggestions for safe partying. The grounds are also equipped with on site emergency medical, supplied potable drinking water, outhouses cleaned daily and a handful of festival producers who genuinely have the attendees safety and best interest at heart.

Claire Mortifee bringing down the house!

Landing at the first day of the hip-hop showcase presented by Chelsie Grobins from Where it’s at Entertainment, I arrive just in time to catch Lozen wrapping up her solo performance. A pleasantly contrasting Claire Mortifee hits the mic next and opens with some perfectly applicable soft words of love and spirituality. I’m totally feeling her as she lays down some slippery rhymes and soulful vocals onto the slithering groovers on the ground.

Between tunes, Claire speaks on introspection and self-reflection, a concept she delves into more thoroughly during her workshop later in the weekend and heavily resonated with my mood. Other noteworthy talents in the hip hop showcase included locals Emotionz, Neph, J.Dohe and many more! Resting on a nice cloud of contentedness I floated to my camp to prep up a long, late evening of interviews. 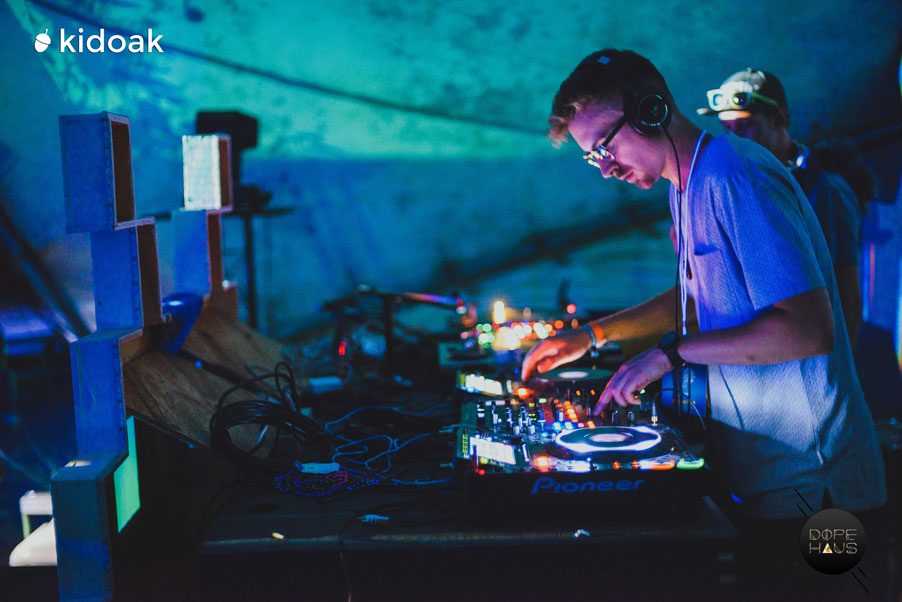 Alex of Reflektor behind the Arcade stage

Sam and I met at The Arcade for 9:00pm to him to film the Reflektor set before I gripped them backstage for our first interview. As dusk slowly descended upon E.L. the three-piece production team played a perfect flow of pretty liquid twinkling melodies that lead into some heavy booty shaking drum and bass tracks; properly opening the twilight with a gentle injection of sensuality.

The D ’n’ B continued at The Arcade from Pacific to Willisist of Shah DJ’s who introduced some more defined, murky and shadowed sounds that were unlike any of the night so far.

I bounced my way over to check out DJ Smoothie at The Wormhole. This stage was a trippy fabric enclosed structure with a bright coloured swirl wrapping a fisheye mirror and topped with a couple of demonic looking spindles. Smoothie was seriously sexifying the crowd up with some quick tempo funk layered with impressive live saxophone skills that totally held the energy at a high for the beach bums.

Getting crazy at the Wormhole stage

Like a kid in a candy store, I grooved off to see a couple of my favorite locals Greazus at The Arcade before Sam and I filmed our second interview with them. After finally seeing them live and getting a chance to meet them I can attest that the duo Greazus are completely deserving of the fame they’ve recently acquired with their revolutionary dark and underground sound, both locally and overseas. They’re funny, talented and legitimately cool bros.

As Sam and I relocated to The Nest, it was overflowing with a sea of flinging limbs. The legendary Krafty Kuts, an absolute OG and king of breakbeat, was slaying the audience with banger after banger of classic tunes and bass-infused remixes. One rambunctious member of the crowd busted onto the platform with an axe and raged towards the large, fake, feathered creature displayed along the back of the stage before getting appropriately escorted away. Martin Reeves (Krafty Kuts) closed with a fresh unreleased track and said thank you to his immense B.C. fan base for coming out. After some searching, Sam and I located him chilling on a comfy beanbag mountain in the greenroom where we got a chance to ask him all of the questions I had prepared for him.

The pystrance Zen Den stage panged off early into Sunday morning. The stage is dipped into a low canyon like area behind the waterfront stages and although completely encompassed by trees is hands down most audible stage from my campsite. Although psytrance itself isn’t my taste, the stage’s design layout was quite impressive. The trees were lined with giant, extremely psychedelic tapestries, which were incredibly detailed under blacklight and soft glowing stars dangled onto the dancefloor.

Catching Yasmin (Sinerise) of TURU Crew at the Wormhole as the 5:00pm temperature settled was great. Her sounds are low, deep and fresh, resting upon a foundation of steady warbles. The breeze is arching the draperies enclosing the framework around her and those gathered around are moving, doing yoga and blowing bubbles while I jot down some last minute questions for the headlining Woofax. 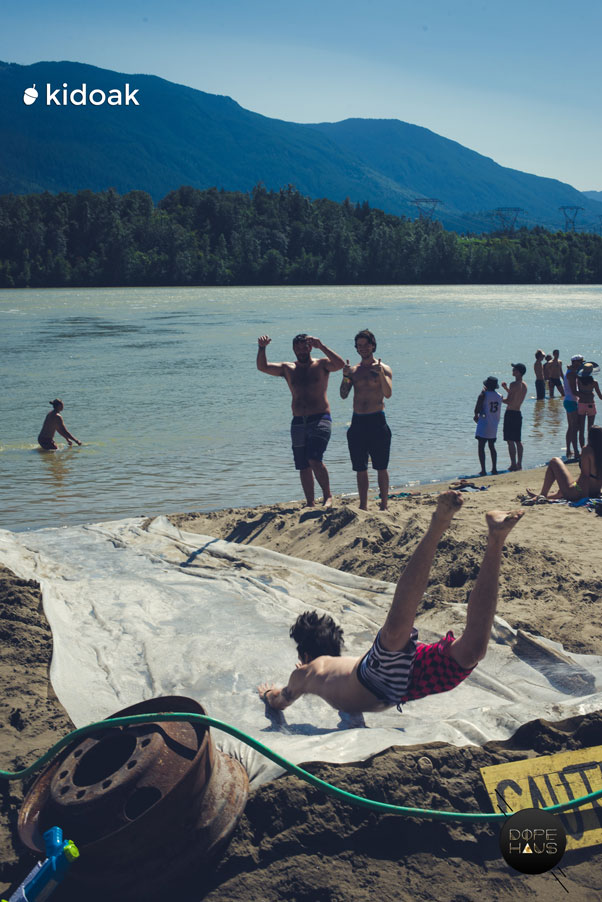 Coolin’ off at the slip ‘n’ slide!

Dusk commenced at The Arcade with Konka’s diverse yet hefty blows of bass as I mentally readied myself for my chat with the talented and worldly Mat The Alien (READ INTERVIEW HERE). After a chill sesh with the extraterrestrial and with no more scheduled interviews for the weekend, I had nothing to worry about except for (eventually) getting some shut eye for Mondays tear down. I was ready to get loose.

Oliver Ple (or Ollie Plé, another organizer of the event) played on The Arcade stage that he himself had lend a hand in Cat’s Eye’s composition with over the last few months. His enthusiasm forcefully propelled the crowd into a completely appropriate frenzy for the final night. Accompanied by shooting rainbows of lasers across the dome, jets of bubbles blanketed an utterly rocking dancefloor while his funky breaks and badass jams got me invigorated and energized. Mat The Alien jumped next into the hot spotlight, showing his deep side and mixing it up with his eclectic dubby feels.

Back in the Nest, I checked out duo Average Gypsy and the hungry hungry house fanatic inside of me was nourished with the beats I’d been craving all friggin’ weekend. The two of them have incredible chemistry and spun a back-to-back style set that turned into a total staff party on the stage. Back at the Arcade,Woofax dropped a resoundingly recognizable tone that signified what I was familiar with from his work with Terravita. Heavy, hard-hitting and incredible layers of dubstep glued me to his mix and he wrapped up the set with live hip hop and feminine vocals. Squeezing all I could out of my remaining time there I hit the Wormhole two more times for Neighbour and LNDN which kept the beach alive and wrapped up my night at the truly different, intricate yet perfect fitting dubs of Abstrakt Sonance.

Just like that, it was all over. One more sleep on the ground of the Cheam Village and it was home stretch.

I want to give some serious props to the coordinators of Electric Love and of course to the artists who managed to squeeze in some time to talk to me. Special thanks to Karmik volunteers and co-ordinators Alex Betsos, Cameron Schwartz, Amy Cotton and Munroe Ro for all your hard work. HUGE thanks to Oliver Ple and Dani Wilson. I thoroughly recommend the festival to those who enjoy the growing essence of something fresh in BC’s rich electronic community and hope all the best for the development of Electric Love 2017. You just might see me there.

Check out Jaclyn’s interview with Mat the Alien HERE!