DOPE HAUS editor Chanel Klein caught up with Hannibal over a pound of hot wings before his impromptu sold out show at the official Moogfest afterparty. He shared his favorite moment working on the Eric Andre show, revealed new ideas for his next tour and gave his opinion about the Fyre Festival disaster. 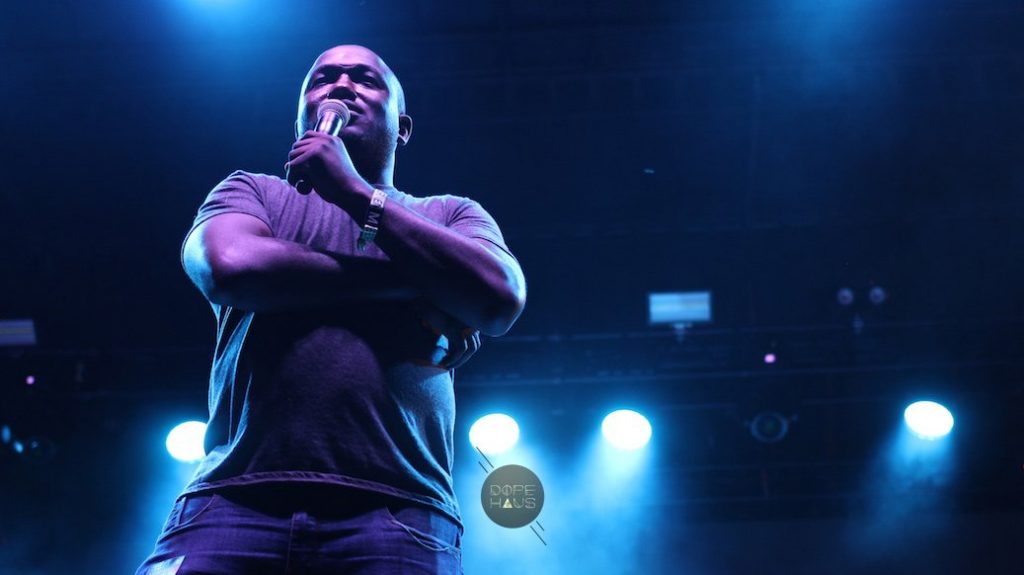 DOPE HAUS: What’s the difference between Moogfest and the other festivals you’ve been to?

HANNIBAL: Moogfest obviously has these concerts and shows but it also has the workshops. My friend DJ Tony Trimm, we hit up Moogfest because we’d been doing goofy stuff with the theremin for a couple months. We said, “Let’s hit up Moogfest and make the Theremini!” I saw a workshop where you could build your own synthesizer. I’ve never done anything like that, I’m not a crafty person at all. To be honest, I didn’t do all the work on it. Tony and my friend Marcus helped.  I did a lot of the soldering and shit but to have that experience making an instrument felt really good. 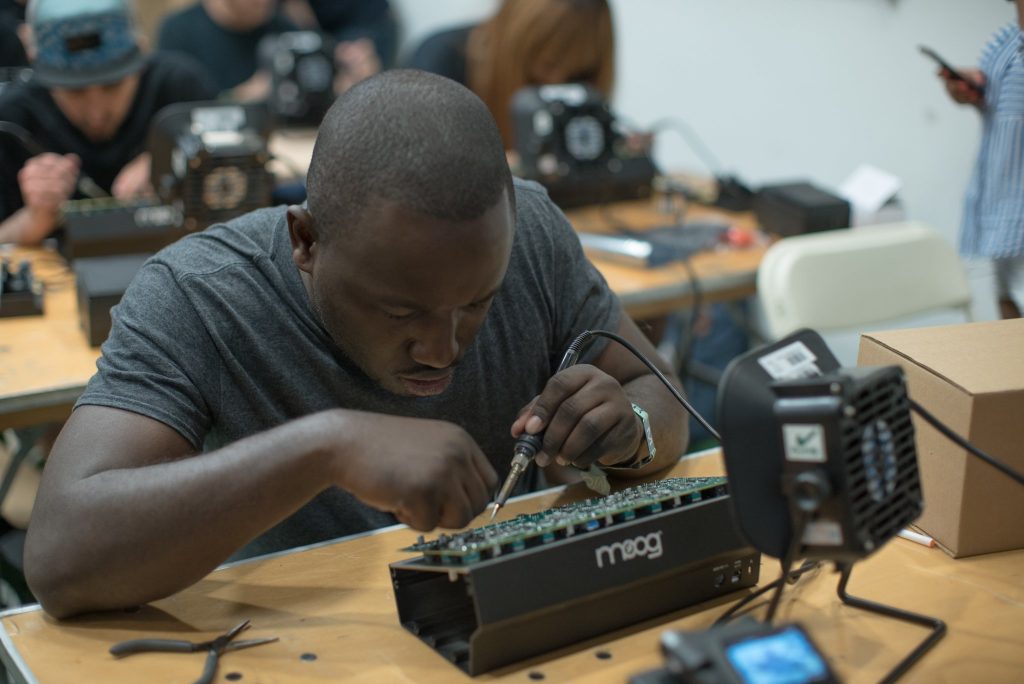 HANNIBAL: People had different synthesizers and instruments and video things that they were showing off. There’s one company that did sensory drums that I played. I was really into it. I’m glad I wasn’t too buzzed while I was in there because I would’ve bought fuckin’ everything. 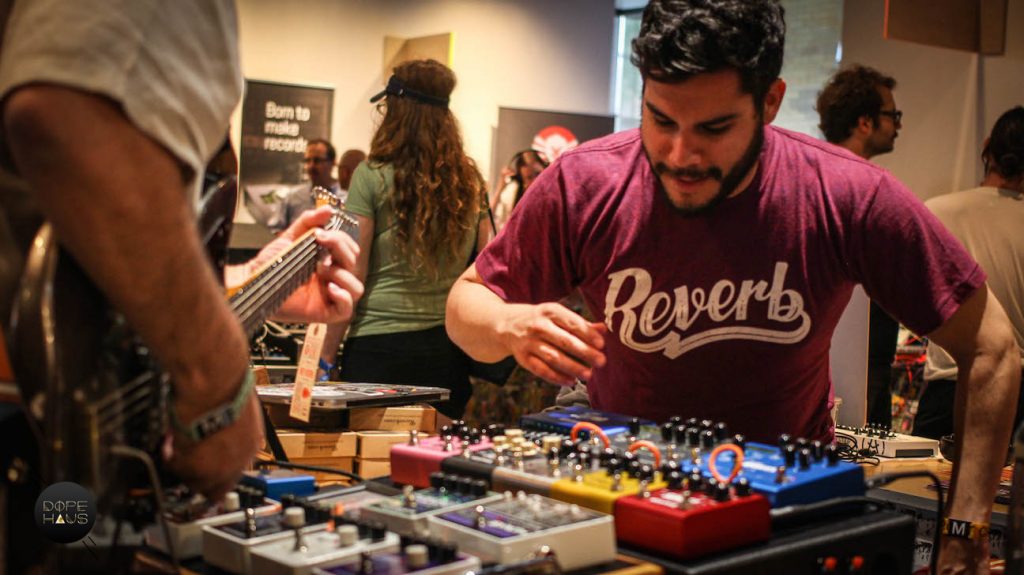 HANNIBAL: Being in that space messing with different instruments and tools gave me a lot of ideas for my next tour. It made me think of all the different ways I can make music. It doesn’t even have to be great music, sometimes bad music will fit a certain scenario. Whether it’s a weird instagram video or a weird scene in a sketch or something for my podcast. It’s been a fun festival for me.

DOPE HAUS: How have the interviews for your podcast been going?

HANNIBAL: The one interview with Animal Collective was up and down but that was on me. I’m still learning the skills of interviewing, you know? The instinct for me as a comedian is to try and get the laugh. As I’ve done the podcast more, it’s fun doing research on people and it makes you dig in. You watch other interviews and find different angles and think of ways to engage in a different way. 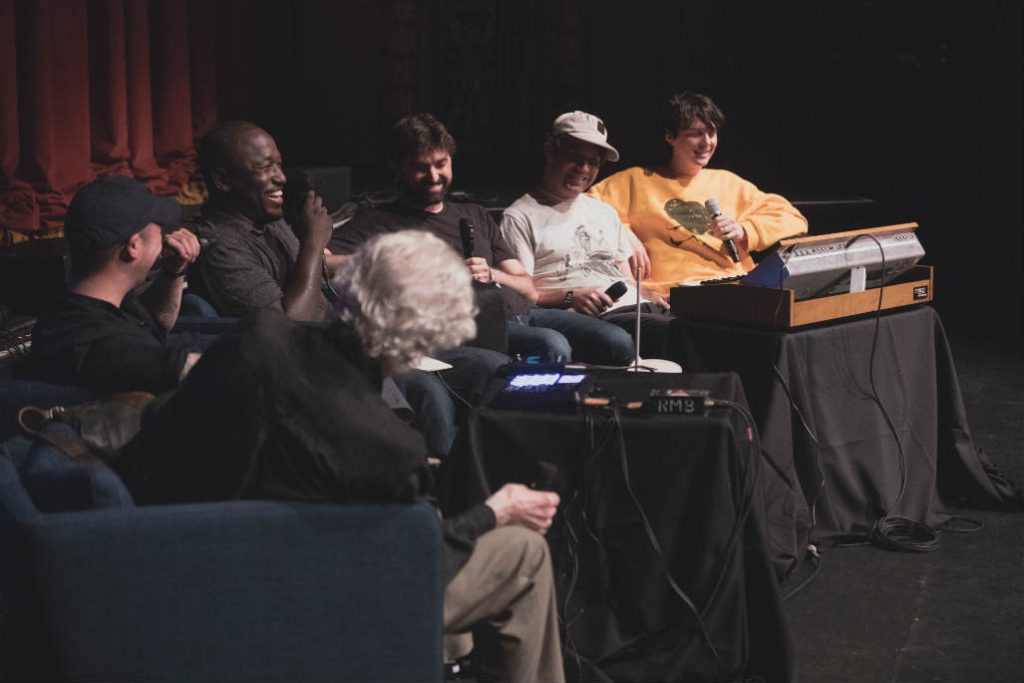 HANNIBAL: The interview with Flying Lotus was great. We’ve done live shows together, TV stuff, making music. We’ve worked together in a bunch of different capacities, video games and shit. We had fun in front of a live crowd. It was crazy. I think a lot of times, in this type of setting, you wanna let the music talk. You don’t wanna be too boring. Moog brought these different instruments and different things to mess around with. It’s a fun element to ask a question through an auto-tuner or voice changer. I’d ask a legitimate music question but did it through auto tune. It was fun and weird. 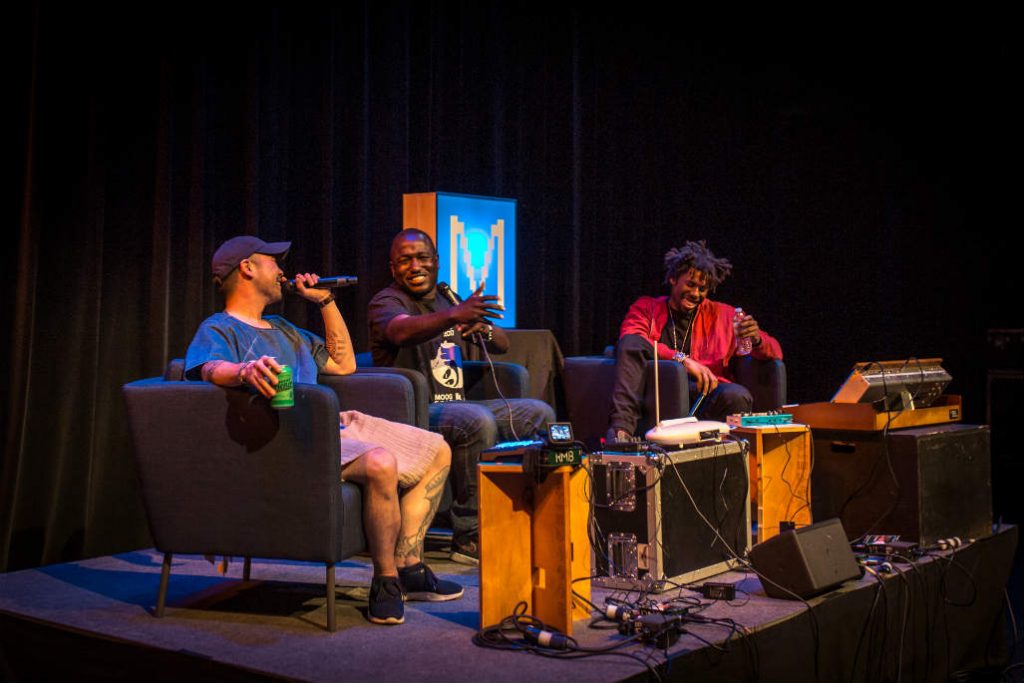 HANNIBAL: There’s no structure. A lot of times it’s me rushing out of bed to get where I need to be. Depends on the type of night I had before. I wake up and look to the left of me. Is there a person or a note? (laughs) I wish I had a better routine. They say you’re more successful when you have a routine where you work out when you wake up or drink a glass of water to get your digestive system moving. I know you’re supposed to have these habits to be a balanced, healthy, mentally stable person but I just don’t follow them. Maybe it’s by choice.

DOPE HAUS: What’s the most fun you’ve ever had on set?

HANNIBAL: Set is pretty boring, usually. It’s like a job. Nobody is playing water bucket pranks or some shit. (laughs) It’s a nice job to have but it’s still work. On the Eric Andre Show, we did Rapper Warrior Ninja, that was really fun. I didn’t expect the rappers to agree to that.

HANNIBAL: That was the hardest I’ve ever laughed. There’s a clip where me and Eric are on the ground laughing. We laugh all the time on that show but it was so crazy. Danny Brown getting knocked out of the air. It was funny as fuck but then I started to get worried that somebody was going to get hurt.

DOPE HAUS: Did you actually kick Flava Flav in the face?

HANNIBAL: No, that’s assault. You can’t do that. There’s too many cameras around. It would be bad for business. I ain’t kicking nobody in the face unless it’s in self defense. Flava Flav was just telling a story and then I’m gonna kick him right in the face? Why would you want to interview someone like that? Only a sociopath would do something like that.

DOPE HAUS: What’s your opinion on the Fyre Festival incident?

HANNIBAL: I was at the launch party for Fyre Festival in some club in New York. Waka Flocka and Ja Rule performed. They were like, “Yea we’re announcing this festival,” then I kinda forgot about it until all that shit happened. I wanna do a festival eventually in Chicago. You gotta book good acts, secure some good sponsors, get some organized OCD people to do the logistics and scheduling. Get some decent design, a solid name, promote it right and give people what you say you gonna give them.

DOPE HAUS: What do most people misunderstand about you?