The dancefloor on the final night of Mutek is packed — yellow patches bounce with the masses on the dancefloor, pinned to the shirts and packs of their party support soldiers. These yellow patch volunteers are members of Montreal’s anti-harassment crew Pluri.

Pluri began their first workshop in August 2016 with co-founders Eliane, Celeste and Zoey. After consulting femmes, trans and queer people about their experiences with harassment on the dancefloor, the group facilitated workshops about safe spaces in Montreal’s punk and electronic scenes. 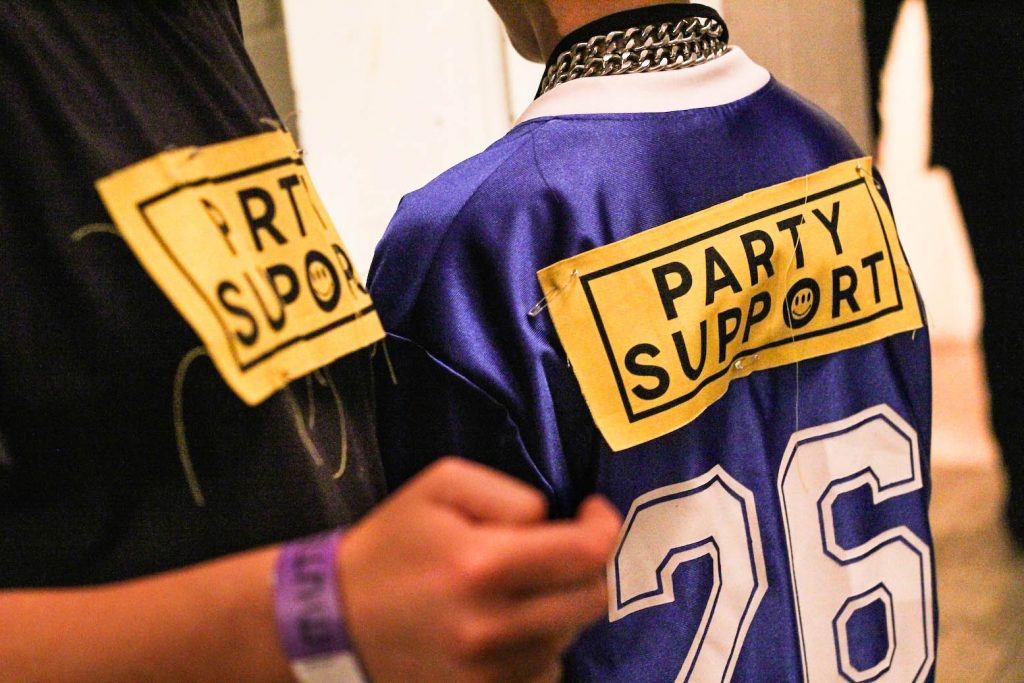 Eliane, who identifies as “they/them”, seems exhausted yet pleased near the end of the night. Mutek is Pluri’s first festival and the anti-harassment crew has been a big success.

“We tackle harassment at large,” Elaine explains as they outline one of Pluri’s popular pamphlets about how to flirt on the dancefloor.

It outlines steps such as “Ask for consent”, “Don’t stare”, “Don’t interrupt someone dancing.” Click the image to get the full guide called “Guidelines for respectful flirting and safer dancefloors.” 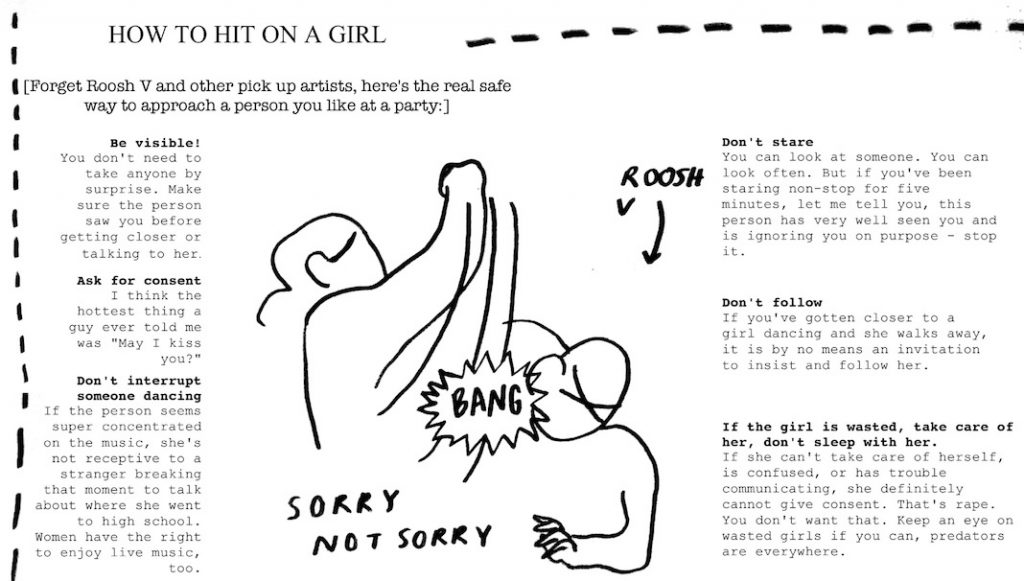 Above is an excerpt from a larger zine called Rave Ethics.

HOW TO FLIRT ON THE DANCEFLOOR

Near the end of the night, an older male was reportedly harassing and groping party-goers. Pluri volunteers used de-escalation techniques to confront the situation and remove the alleged offender from the venue. No security or bouncers were necessary. No fists. No teeth. Only simple words and a nod of understanding.

It’s not often that altercations like these end up without a fight.

Pluri’s volunteers work closely with festival staff and venue security who may not be familiar in recognizing certain harassment behaviors or how to aid a raver in need. However, bars and nightclubs aren’t usually as easy-going as an avant-garde music festival like Mutek.

Pluri volunteer Enes describes the typical nightclub bouncer attitude like this, “[Club bouncers] are just like, ‘That’s not my problem if someone doesn’t feel too good or is too high. I’m just here to remove violent people.’” 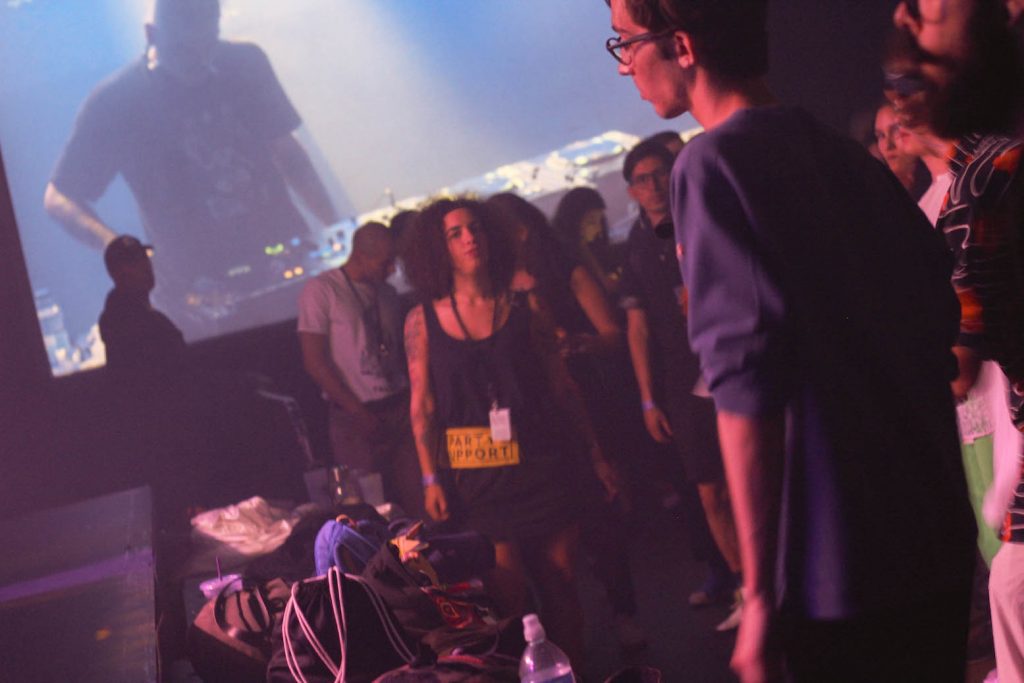 In June 2017, the Montreal Women’s Council reported that over 50% of women surveyed experienced harassment at music festivals. Pluri picked up the pace to inspire a Peace-Love-Unity-Respect environment in Montreal’s nightlife while similar groups like Good Night Out hold the flag in Vancouver. 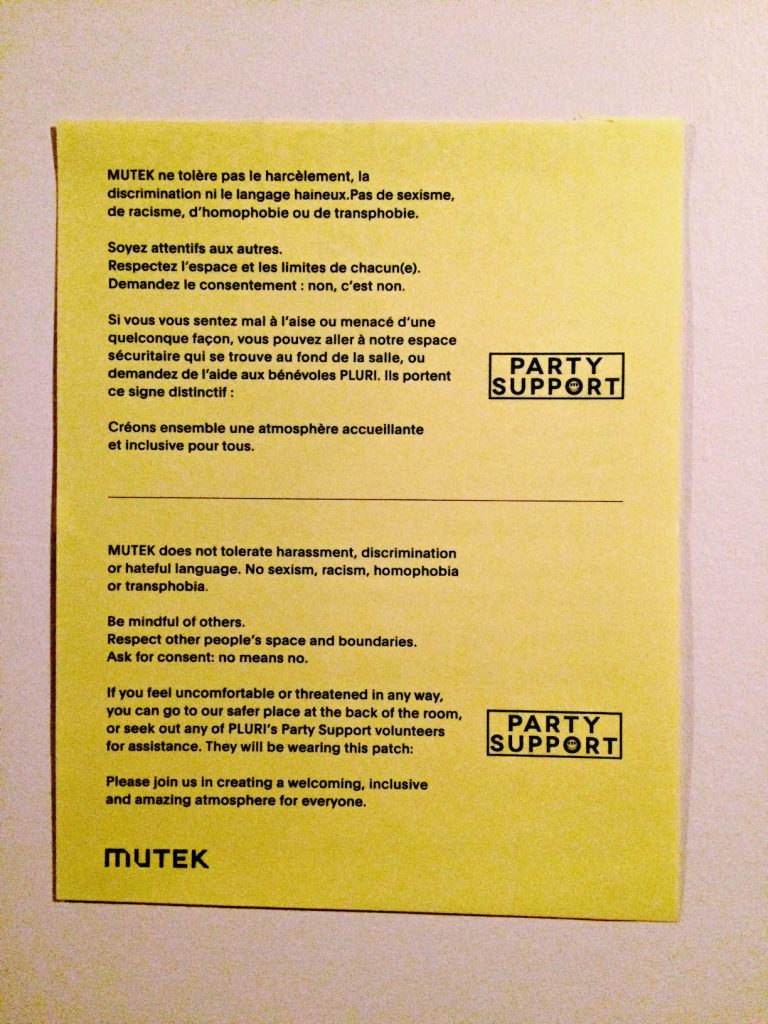 Pluri flyers posted in the gender neutral bathroom at Mutek

After Mutek, Pluri picked up some work with Montreal’s weekly outdoor electronic festival Piknic. According to Eliane, Pluri has since reached out to DIY promoters and given them access to volunteers through their Party Support program.