DOPE HAUS press correspondent Jaclyn Adair chatted with Evan Chandler (Slynk) and Dave Rollie and Tim Livingstone of SkiiTour at this year’s Electric Love music festival in Agassiz, British Columbia. Evan hails from Brisbane, Australia, Dave from New Zealand and Tim is a proud homegrown Kelowna boy. Editor’s note: all three subjects are being eaten alive by a swarm of hungry mosquitos by the bank of Fraser River during the entire interview.

DOPE HAUS asks: Is it true your alias “Slynk” refers to your trademark ability to fall down the stairs like a slinky when you’re drunk?

Slynk: It is true actually. (Tim and Dave crack up)  It’s not something I’m proud of but when I was younger I would get a bit wild. My nickname was Slinky for a long time and when I came to choose a DJ name I thought, “Slinky is a cool DJ name.” Then there were a thousand other DJs called Slinky so I changed the I to a Y and there you go.

Prime Minister Hoser tries to steal a move from Slynk

DOPE HAUS: Tim and Dave, I take it you’re both skiers and not snowboarders?

Tim: Yeah, we both are skiers.

DOPE HAUS: How did you guys meet?

Tim: Have you heard of Grindr? Laughs No, we met randomly in Whistler. Well, Rollie (Dave) was cooking hot dogs. I was like, “Hey man, if you stick with me I can get you playing festivals and won’t have to be cooking hot dogs anymore.”

DOPE HAUS: Slynk, would you consider moving from Brisbane to living in Vancouver a career move?

Slynk: It was mostly like a career move because I had a manager, like an agent lined up but it was also just like, “Hey, wouldn’t it be cool to live in a different country? Let’s go do that.” I’ve been here for 3 years, so it’s good times.

DOPE HAUS: My boyfriend is from Brisbane as well and I know he’s mentioned that festival attire would be a no-go in the clubs out there. Is that true?

Slynk: Yeah, I mean, people in Brisbane tend to think they’re way cooler than they actually are. No one wants to stand out. They don’t really like to do anything fun they’re just like, “Oh, I hope everyone thinks I’m cool.” The dress codes for the most popular clubs in Brisbane are just ludicrous.

DOPE HAUS: If you played at a club in Brisbane, would you be able to wear a onesie when you walked in the door?

Slynk: Absolutely not. One time I was rolling into the club that I had DJed at for a year with a couple of friends and the bouncer said, “You can’t come in cause you’re wearing the wrong shirt”. I was like – DUDE I see you every weekend! And I fuckin’ DJ here! Super pretentious. But anyways, that was 3 years ago so I don’t know what it’s like now.

DOPE HAUS: What do you think attracts so many aspiring artists to B.C. and the west coast?

Tim: I think because of Shambhala, it has really made this west coast scene. Its’ become an international hub of Canada.

Slynk: I think it’s in the personality of the people that live here. It’s totally opposite to what I was describing in Brisbane. [Canadians] like, don’t give a fuck! Even if they’re the only ones on the dance floor, if they like the music, they’ll dance.

DOPE HAUS: And it doesn’t matter what shirt you’re wearing!

DOPE HAUS: You guys all play really bouncy, high-energy, upbeat tracks a lot. Is there any music that you guys enjoy that doesn’t fit within your alias? Or something your audience might not be used to?

Tim: Yeah, most of the festivals we have been booked for this summer we have the opportunity to play 2 sets. So we’re able to play like a chill, down-tempo set and like a more bangin’ set as well. We just got booked again at Shambhala for the Fractal Forest, so we can play more of a funky, groovy set versus our banger set.

DOPE HAUS: So you’re playing both Fractal and Amphitheater stages? You guys bringin’ the snow machines?

DOPE HAUS: Slynk, I really want to ask you about the TalkBox. You’re doing a weekly show with it on Facebook and saw you play with it at 560 in Vancouver. I wanted to know what inspired you to buy it.

Slynk: It was a bit of an impulse buy, actually. I was streaming on Twitch, which is something I do because if I have to do a lot of production work I might as well hang out with some people and make it a little more social ’cause otherwise it’s just me in my room, everyday by myself. I feel a little isolated sometimes so I stream on Twitch every now and again and people come in with some comments and make me laugh or whatever. Someone posted a link in the chat and I checked out this song and was like, “Man, what’s up with that vocal?” and the girl was like, “It’s an MXR TalkBox“. It was only 250 bucks and I just bought it that night. At the start of this year it was like a new year’s resolution to actually learn how to play it. I thought it would be a lot easier but it’s really fuckin’ hard. I’ve only played live with it three times, tonight will be the fourth time.

DOPE HAUS: SkiiTour, I was reading your bio on the Shambhala page and found some pretty interesting fun facts about you two. Do you know what I’m referencing?

Slynk: Tim’s chopstick game is so on point.

DOPE HAUS: Dave, how the hell do you eat 96 chicken wings? Is that physically possible?

DOPE HAUS: Did you vomit after 96? 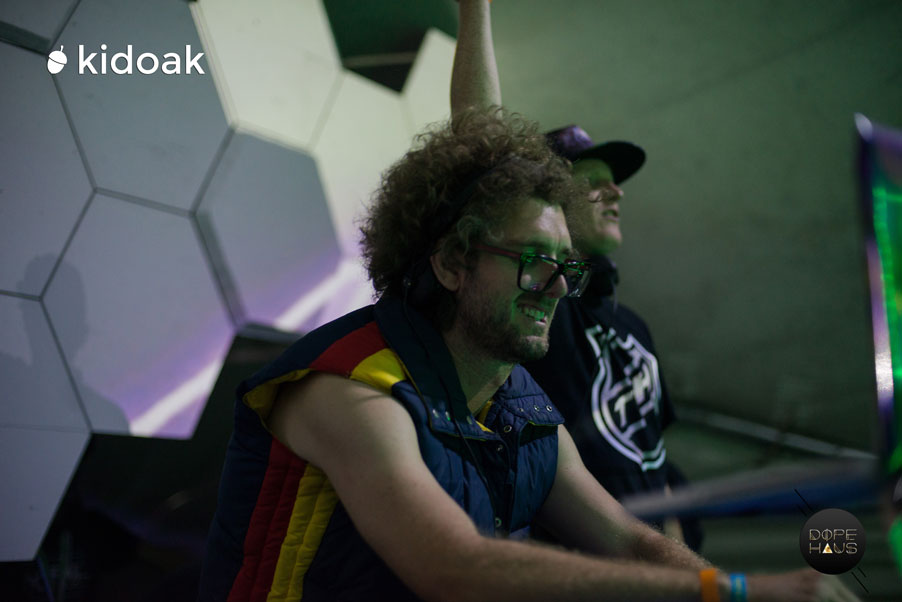 DOPE HAUS: What would you change about your approach next time?

DOPE HAUS: Thanks for the pointers. Slynk, I wanted to ask you about the video you posted when you hit ten thousand fans on Facebook. It was this slow motion video of you sensually eating a banana-

Tim: We filmed that!

Slynk: Yeah I posted on Facebook asking what I should do for 10 thousand fans and people were like: “play in my city”, “release an album”, blah blah blah and then one person said, “Eat a banana”.

Tim: Well, the thing is – in his [contract] it says he’s not allowed to come within 50 feet of a banana at any point during the night. That’s what it says in the contract when you book Slynk. He hates bananas.

Slynk: I puked straight after.

DOPE HAUS: I was gonna say, 96 chicken wings and this guy pukes after 1 banana.